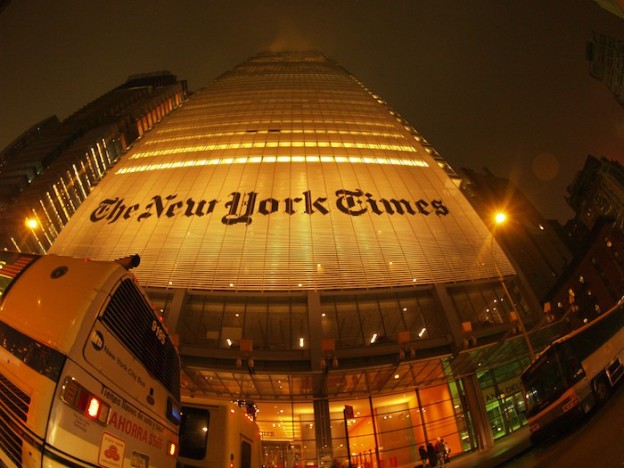 This internal New York Times innovation report from 2014 is an in-depth portrait of an institution struggling to remake its culture for the digital age. Arthur Gregg Sulzberger, the publisher’s son and presumed heir apparent, was the leader of the committee that created it.

In an overview, Nieman Lab’s Joshua Benton noted his impresssion that despite all of its resources, the NYT “doesn’t have the time or power to get outside of the day-to-day grind of making a newspaper to think about its future.” Over the past 10 years I have indulged in an online Oscar prediction contest called Can You Beat the Crowd? I recruit as many friends and colleagues as I can to register their predictions online, and from the collective smarts of the group I compile “the wisdom of the crowd,” aka Crowd Favorite, for each Oscar award. I then offer Netflix subscriptions and other movie-lover prizes to any player who can out-predict this crowd wisdom.

Last night, as our obsession with Hollywood played out before 40 million TV viewers (briefly crashing Twitter and overwhelming ABC’s streaming telecast), this contest produced a remarkable “first” — there were no winners. The Crowd beat everybody.

The online “hive mind,” which included 159 players from 10 countries, correctly predicted 23 out of 24 awards on the night of triumph for “12 Years a Slave” and “Gravity” (and I might add, for host Ellen DeGeneres, Matthew McConaughey and Spike Jonze).

The only award The Crowd missed was Animated Short Film, which went to “Mr. Hublot” instead of Crowd Favorite “Get a Horse!”

The Can You Beat the Crowd? players, who ran the gamut from movie-loving college kids to movie-loving retirees, with a smattering of industry insiders, were as smart as ever — 11 players scored 22 out of 24. Exceptional, in any other contest!

Why was The Crowd so smart this year? After all, in previous outings over 10 years The Crowd has never done better than 19 correct.

Oscar pundits have noted that this year’s results were more “predictable” than usual, given the run-up of well-publicized awards from SAG, BAFTA and Golden Globes. But if that’s true, shouldn’t one or more players have at least tied The Crowd?

Maybe better information was available this year? Sites like Entertainment Weekly, The Los Angeles Times and nytimes.com were more active than ever, along with a constellation of other web sites, blogs and Twitter pundits (Ellen DeGeneres’ “selfie” with stars was retweeted over 1 million times).

Whatever the reason, it was a remarkable demonstration of “the wisdom of crowds” phenomenon that inspired the contest a decade ago. The idea was spawned from James Surowiecki’s 2004 book, The Wisdom of Crowds: Why the Many Are Smarter than the Few and How Collective Wisdom Shapes Business, Economies, Societies, and Nations. “Large groups of people are smarter than an elite few, no matter how brilliant,” Surowiecki observed.

So on this remarkable occasion, the many truly were smarter than the few. Which makes me wonder… Maybe I should focus this crowdsourcing predictive power on more consequential events — earthquakes, perhaps, or mid-term elections?